Over 80 Years of Fighting for Justice

Spring 1927— In his junior year at Cumberland University, Myles attends a YMCA conference in Nashville where he has his first contact with black and foreign students. He is upset that he cannot take a Chinese girl to a restaurant or enter a public library with a black friend.

Summer 1927—Myles spends the summer in Ozone, Tennessee, organizing vacation Bible schools for the Presbyterian church. He also holds meetings where community people discuss their problems. Unable to answer their questions, he gets them to share their experiences and discovers that they already have many of the answers. He later calls this experience the origin of Highlander.

Niebuhr, who believes that society must be reformed to achieve “a social order based on the religion of Jesus.” Myles also visits the Henry Street Settlement and the Brookwood Labor

1930-1931– Myles attends the University of Chicago, where he studies with Robert Park in the sociology department. He is impressed by Park’s view that conflict can be used to encourage people to work for a better society, and by Lester Ward’s view that education requires action. He also meets Jane Adams and visits Hull House.

1931-1932—Myles travels to Denmark to visit the Danish folk schools, which played a vital role in revitalizing Danish culture and addressing the country’s social and economic problems in the late 1800s. He admires their informality, their close student-teacher interaction, and their use of culture as a tool for learning. While there, he decides to start a similar school in the South where teachers will work with both black and white students to address community problems.

In 1932, Myles, Don West, Jim Dombrowski and others founded the Highlander Folk School in Monteagle, Tennessee. They focused first on organizing unemployed and working people, and by the late 1930s Highlander was serving as the de-facto CIO education center for the region, training union organizers and leaders in 11 southern states. During this period, Highlander also fought segregation in the labor movement, holding its first integrated workshop in 1944.

Highlander’s commitment to ending segregation made it a critically important incubator of the Civil Rights movement. Workshops and training sessions at Highlander helped lay the groundwork for many of the movement’s most important initiatives, including the Montgomery bus boycott, the Citizenship Schools, and the founding of the Student Nonviolent Coordinating Committee (SNCC). In 1961, after years of red-baiting and several government investigations, the state of Tennessee revoked Highlander’s charter and seized its land and buildings. The school reopened the next day as the Highlander Research and Education Center. From 1961-1971, it was based in Knoxville, and in 1972 it moved to its current location near New Market, Tennessee.

In the late 1960s and 1970s, Highlander played a vital role fostering organizing in Appalachia, supporting anti-strip mining and worker health and safety struggles, among other efforts. In the 1980s and 1990s, Highlander expanded its work to support grassroots groups fighting pollution and toxic dumping, and supported the emerging anti-globalization movement by sponsoring workshops on economic human rights and trade and globalization issues and by forging connections with international activists and organizers. In January 1990, Myles died of brain cancer

Today, Highlander is continuing to fight for justice and equality, supporting organizing and leadership development among Latino immigrants and young people, encouraging the use of culture to enhance social justice efforts, and helping organizations in diverse constituencies develop new strategies and alliances.

We prioritized programming for organizing and leadership development ; strategic efforts and pro-grams to develop tools and mechanisms needed to advance multi-racial, inter-generational movement for social and economic justice in our region; supported and connected organizations from the Deep South, Appalachia, and immigrant communities; leading organization in the development and influ-ence in the field of cultural organizing. 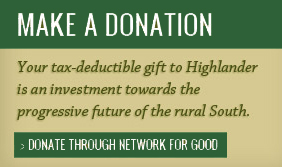