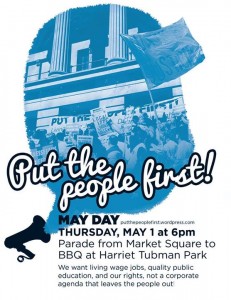 *5:30pm – Meet at Vine Middle School parking lot for bus transportation to Market Square; If you cannot arrive at Vine before the event, cars will be available to take you back to your vehicle downtown after the BBQ.

A broad coalition of unions, community, student, civil rights, and faith groups, representing thousands of members will gather at Market Square in downtown Knoxville to demand Tennessee’s elected officials Put the People First. Under the banners of “A Living Wage, Public Education and Democratic Rights for All” residents will rally and march to Harriet Tubman Park, across from Vine Middle School for a community BBQ.

As a continuation of the highly-attended event held on the steps of the Tennessee State Capital on March 11 of this year, Put the People First is now building an active statewide coalition of labor, racial justice, economic and public education workers to demand the Tennessee State government abandon their attack on Public Education, Wages, Labor Organizing and our Democratic Rights to assemble and voice dissent toward harmful policies and legislation. Put the People First call on our elected officials to make the interests of working Tennesseans their top priority.

National Association for the Advancement of Colored People