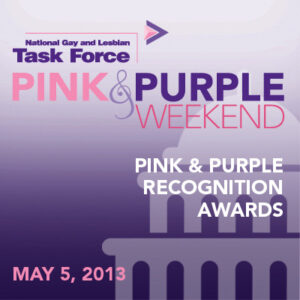 Highlander is honored to be a part of the National Gay and LesbianTask Force’s Pink & Purple Weekendon May 3-5. The Task Force is celebrating its 40th year with a weekend full of events, parties, and fundraisers, and the Pink & Purple Recognition Awards brunch on Sunday, May 5 is its premier annual gala, which honors activists and leaders who are making great strides for LGBT equality.

This year, the honorees are award-winning actor Jeffrey Wright and former Assistant Attorney General Robert Rayben, and the event will also include a special toast to Highlander, honoring its 80 years of service in grassroots organizing and movement building. More information about Pink & Purple Weekend, including Host Committee and Sponsorship opportunities, is available here.

Highlander was also present at the Task Force’s 25th National Conference on LGBT Equality, Creating Change, from January 23-27 in Atlanta, where we even received a shout-out during a song in the opening plenary! Director Pam McMichael and Education Team Member Marquez Rhyne led a training session on Popular Education and Organizing for LGBTQ Liberation at the conference, which introduced workshop participants to the basics of popular education as a methodology and gave them the chance to explore different ways of applying the methodology to work in their local communities.

In addition, Marquez and the Fahari Arts Institute’s Harold Steward facilitated a workshop on Southern-Style Cultural Organizing, which used conversation and learning exchanges to explore the power of art and culture as tools for creating social change, while Pam and Terry Keleher of the Applied Research Center led a workshop entitled LGBTQ SURJ: White Queers Showing Up for Racial Justice, which used storytelling and role play to teach attendees concrete strategies for engaging white LGBTQ people in the fight for racial justice, thus strengthening the broader movement.