On Saturday evening Highlander will provide a special dinner – Food for Generations to Come: A gathering for breaking bread and sharing in community. Our menu includes fabulous, fresh flavors from local farmers and a taste of Highlander’s commitment to sustainable communities and economies regionally, nationally, internationally. After that, join in dancing or film watching. Can only come on Saturday night or want to view menu click here.

Highlander Dance:  Dance and enjoy a live band—Los Jornaleros Del Norte, a Los Angeles band of day laborers, whose poetic and powerful songs about life on the other side of public visibility combine ambient sounds like sirens and helicopters with traditional Latin rhythms, tejano, rumba and cumbia. Read about them at http://leslieguttman.com/editorial/the-day-laborer-band/. There will also be a global DJ, so people can dance under the stars to music from around the world.

You Got to Move Film Showing: For those who want to sit out the dance, there will be an opportunity to watch the newly released DVD, You Got to Move, a documentary about Highlander with commentary by Bill Saunders, who is featured in the film.

Bill Saunders, from John’s Island, South Carolina, has worked tirelessly for justice in the Charleston area for decades. He was part of the Progressive Club on John’s Island and came to Highlander in 1959 with Esau Jenkins, Bernice Robinson and Septima Clark after the police arrested Ms. Clark on the island. He later served on the Highlander Board of Directors, and helped organizing hospital workers in Charleston in a successful 1967-1969 campaign. Bill Saunders has also run a radio station, worked on sickle cell anemia, police and community relations, voter rights, and the challenge of controlling development on the Sea Islands in order to preserve community and the environment. He also serves on the Gullah-Geechee Cultural Heritage Corridor.

According to Mr. Saunders, “If democracy is not working, then capitalism destroys everything small.” …  ”You have to enjoy the process, and if you stay so focused on the end result, you can mess the whole thing up.”

Our 80th Anniversary celebration would not be possible without the support of  sponsors! If you want to become a sponsor, contact us now at jpeacock@highlandercenter.org. 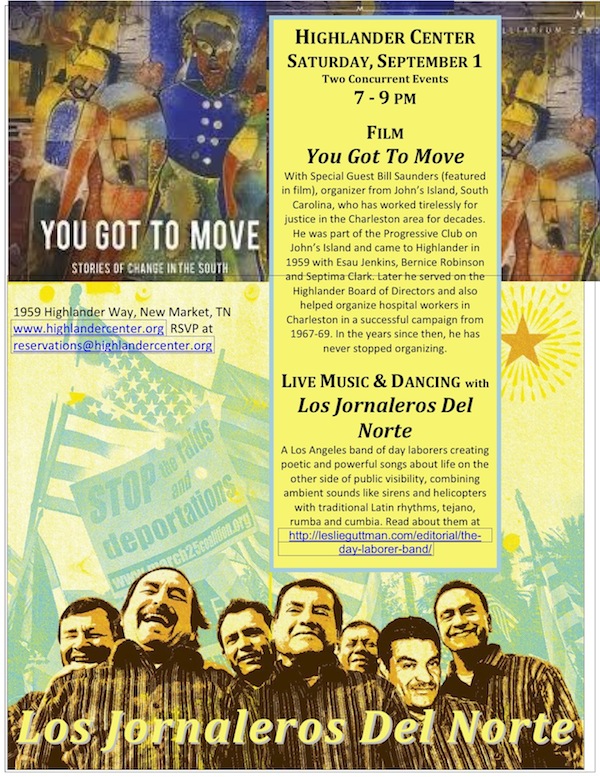