Civil Rights and the entire social justice movement lost a great leader last month with the passing of Fay Bellamy Powell. Born in Pennsylvania, Fay served in the United States Air Force before moving to Selma, Alabama in 1965 to run the SNCC office there, where, she wrote in Hands on the Freedom Plow: Personal Accounts by Women in SNCC, “I immediately became the entire office staff: the manager, the secretary, receptionist, and typist, as well as the media specialist.” She later left the office to work in the field in Greene County, Alabama: “I was not looking for more danger,” she said, “but I really believed that I shouldn’t do less than what I would ask others to do.” After her work with SNCC, where she is remembered for keeping the Black woman’s perspective as a central part of meetings, she  went on to become a staff member of the Institute of the Black World, a founding organizer of the National Anti-Klan Network, and a co-founder of the We Shall Overcome Fund.

Through the We Shall Overcome Fund, Fay’s relationship with Highlander spanned over fifty years, and it was through that work that we here were lucky enough to meet her. Education Team member Marquez Rhyne remembers her as candid, open, and nurturing, with an uncanny ability to “demystify the Movement.” Her calm, even-keeled demeanor and no-nonsense attitude drew people to her, and she was always happy to listen. 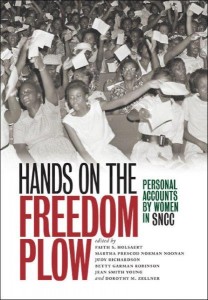 “You have to be open to hear other people,” Fay told the Voices Across the Color Line Oral History Project by Kenan Research Center at the Atlanta History Center. “If you don’t, what you’re about is nothing. You’re about yourself, which is not what the movement is.” This philosophy was embodied by the way she treated those who came to her for guidance. “She made time for you readily,” Rhyne says, and Education Team member Susan Williams recalls, “She listened to young people. She really cared about what they said, and she wanted them to keep on talking.” Education Team member Elandria Williams adds, “She engaged you in a way that put people at ease. She made it okay that you didn’t know everything.”

And when it was over, when business was done and Fay had given you whatever piece of quiet wisdom you came to her for—and given it freely and generously—she wanted you to stay and eat with her at the Busy Bee; she was ready to drive into town and run errands with you at 10:30 at night, even though she herself was buying nothing.

She was also an avid and talented photographer, who recorded every gathering she could and shared the fruits of her labor as readily as she shared her knowledge. “When she took a picture of you, she gave it to you,” Coleman says. And her photographs, like her wisdom, captured the world around her with sharpness and clarity and life. Coleman remembers a picture Fay took of her and her daughter, and the way that photo captured something essential about them. “It was so us,” she says of the picture. “It was what we are. I didn’t even know she was taking the picture. Her pictures were her words.”

“People whose names never appeared in the national press or never had documentaries made about them were the people who started what we now know as the Civil Rights Movement,” Fay wrote. “They were the folks who remained in those communities when many SNCC people returned to their home states.” Fay was one of those people.

“I have learned a lot from Fay Bellamy Powell,” said Highlander’s Director, Pam McMichael. “We all have, and in that way her legacy will live on.”

She was very dear to all of us, and we will always remember the calm encouragement and truth in her voice, her presence, insights and humor as she sat and leaned in the Highlander rockers for so many years.

In a note she sent to friends after Highlander’s 75th anniversary celebration in 2007, Fay wrote, “Working and knowing people like yourselves, being involved in making change and assisting others to do the same is the best kind of life I could ask for, and this is my life and I am absolutely thrilled. Thank you all.”

Thank you, Fay. We will miss you.